This Mallow dress is still the fruit of a summer dream, a hot summer, a muggy summer where we dress light and breathable.

In the end, the summer was muggy, well wet but not very warm. But whatever, the die was cast. I had cut it out so it had to be sewn!

The Mallow dress is one of dozens of free patterns available on the Mood website, a large New York fabric store. The site features the “Sewciety” section which is an active blog with tutorials, sewing hacks, fashion trends of the season and lots of free patterns.

We don’t know who drafts them, we don’t know if they are tested, there are some doubts about the quality of the construction explanations… but hey, they are free. 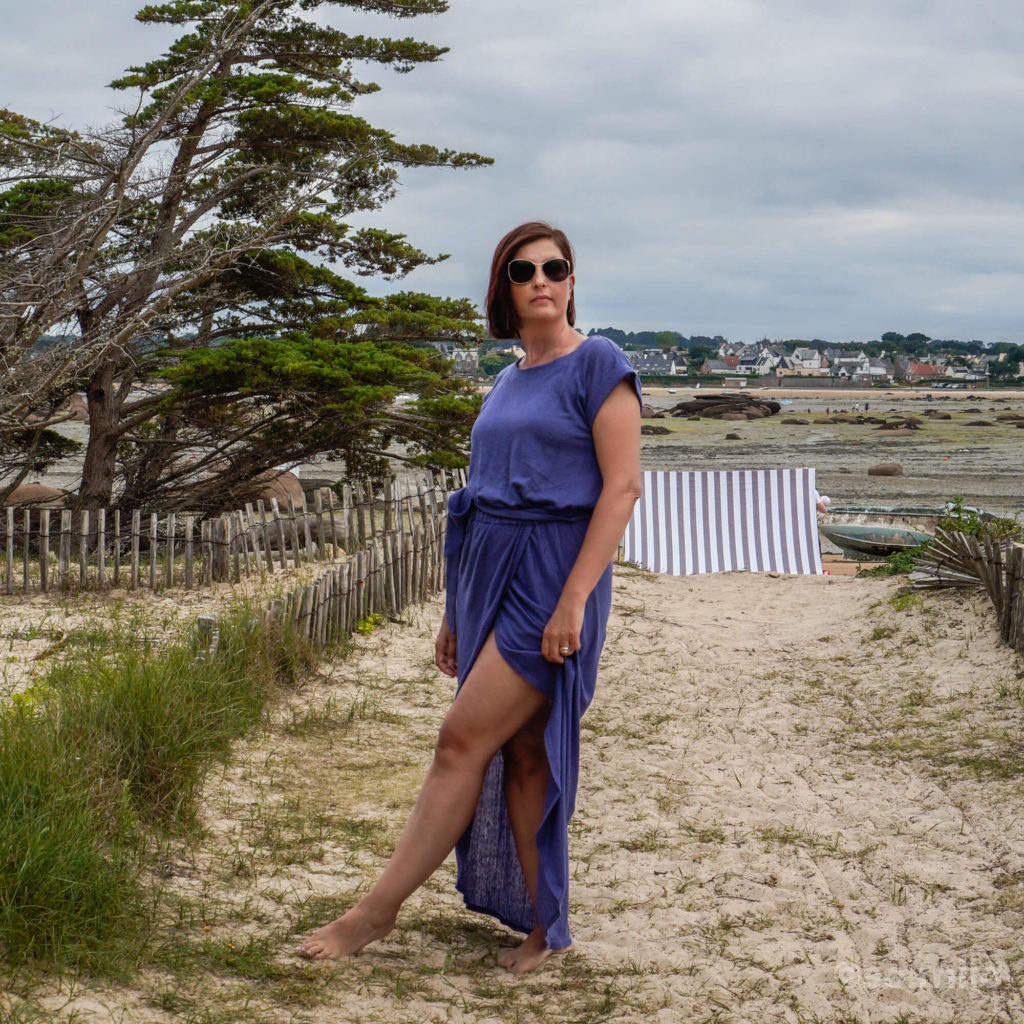 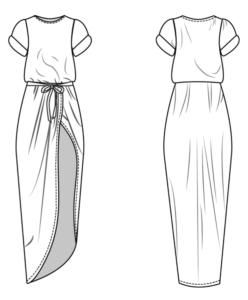 The Mallow dress pattern is intended to be made in a fairly soft jersey. However, I think it would also look great in a woven fabric with a good drape (yes, like viscose or silk!).

This is a dress with a loose top with kimono sleeves finished with sleeve bracelets and a wrap skirt with a “hi-lo” effect: shorter in front than the back.

Contrary to the technical drawing, the sleeves are “grown on” and not attached. 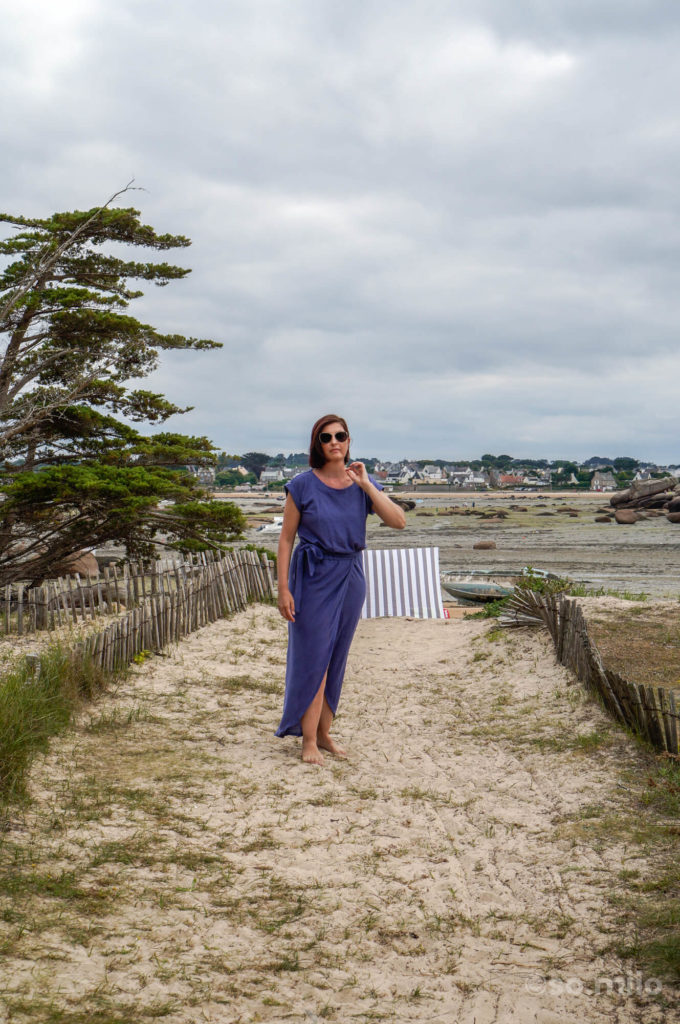 The size range is very inclusive since we go from size 2 to 30! 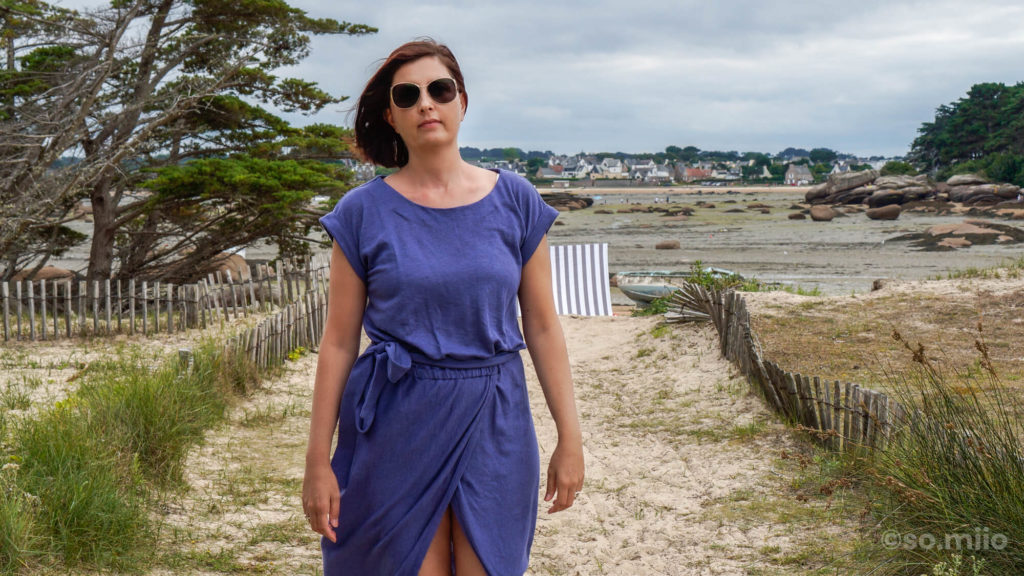 The pattern is in letter format and the explanations are directly on the site. 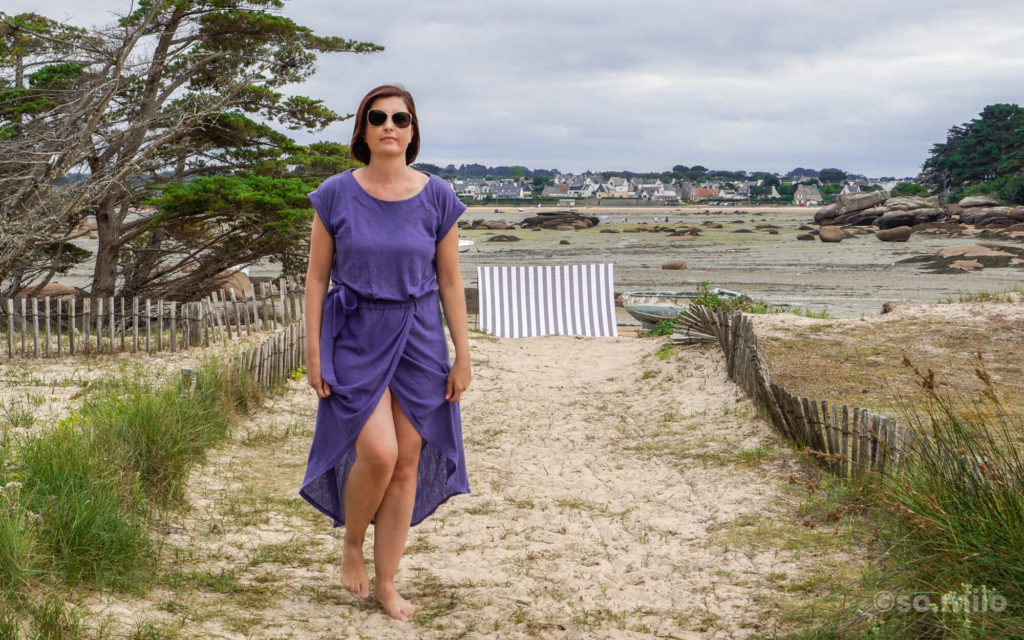 My pattern print came out wrong and the top margin was eaten. Bad printer, baaad printer.

So, besides a little loss in height (but hey, I’m 1.60 m… I can afford to have a pattern that loses 2-3 centimeters in height), I mostly struggled to align the lines & curves. Pim, pam, poum, I redrew a bit by hand.

Olé. At the same time, you’ll see, the pattern is not very precise.

So yes, associating the terms “sexy” and “polo knit” may seem quite surprising, daring or even downright antinomic.

Because what could be less sexy than a polo shirt? And yes friends, I have a problem with polo shirts. And sweaters worn on the shoulders (a very French and even Versaillaise habit).

On the style scale, it is for me the opposite extreme (but no less infamous!) of white sports socks in sandals. But anyway. 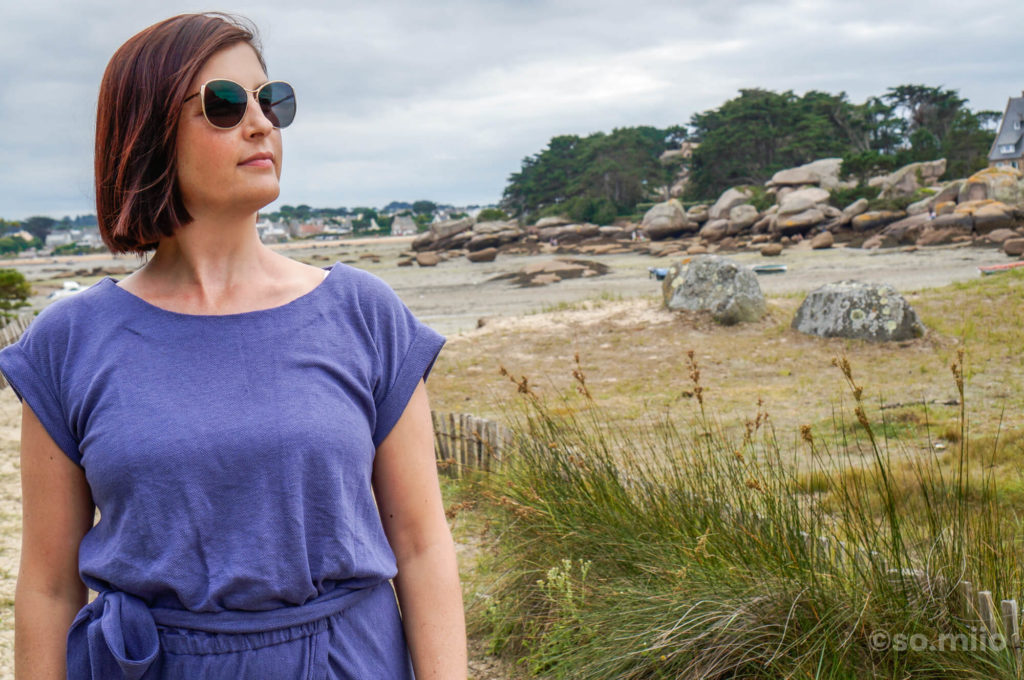 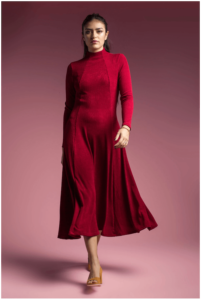 So why did I sew this in a polo stitch you ask?

Let’s break the mystery: before the death of the Couture Lin website, I had bought this knit during a “buy 3 meters, get the 4th free” promotion. The idea at the time was to sew a Jackie dress from Victory Pattern.

Ooh, the idea is so lame! Heck, I put my neurons to work before embarking on this disastrous idea. The Jackie dress requires a good elasticity and this is clearly not the main characteristic of linen jersey.

So I was stockpiling this fabric… aimlessly since I hate polo shirts. And then 4 meters what. A very nice and trendy color though. 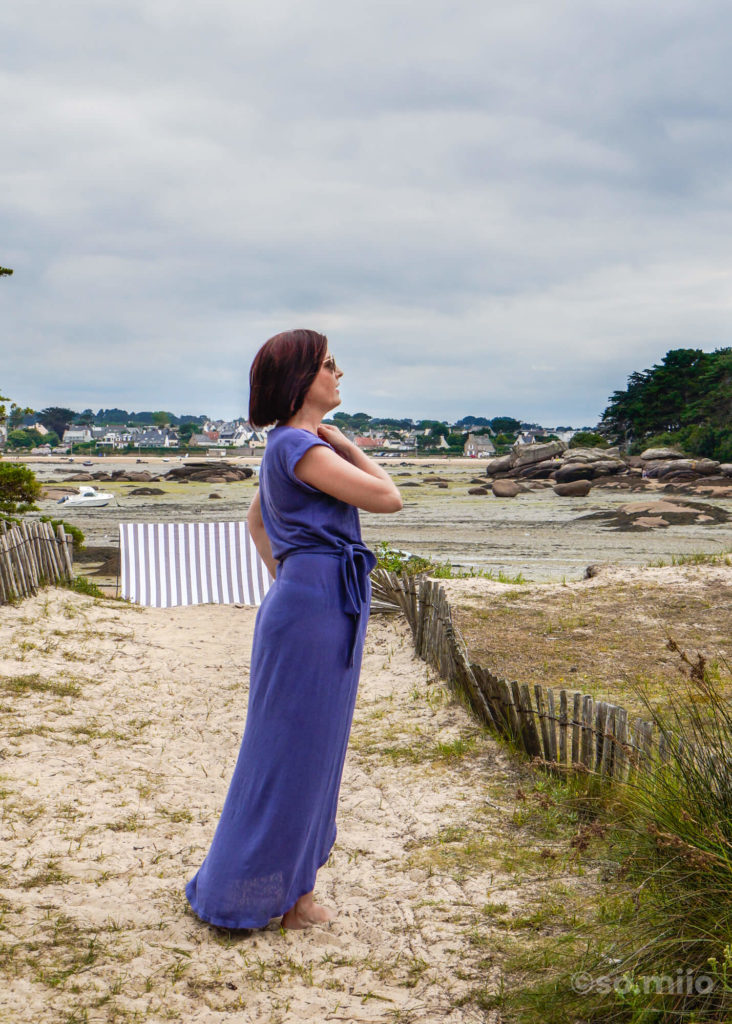 And then I discovered the Mallow dress. I thought bingo, here’s a dress to clear out my linen knit stock.

In the end, I still have quite a bit left… the pattern consumes a lot less than what is listed on the site in size 8-10.

At least I still have enough to make one more dress! 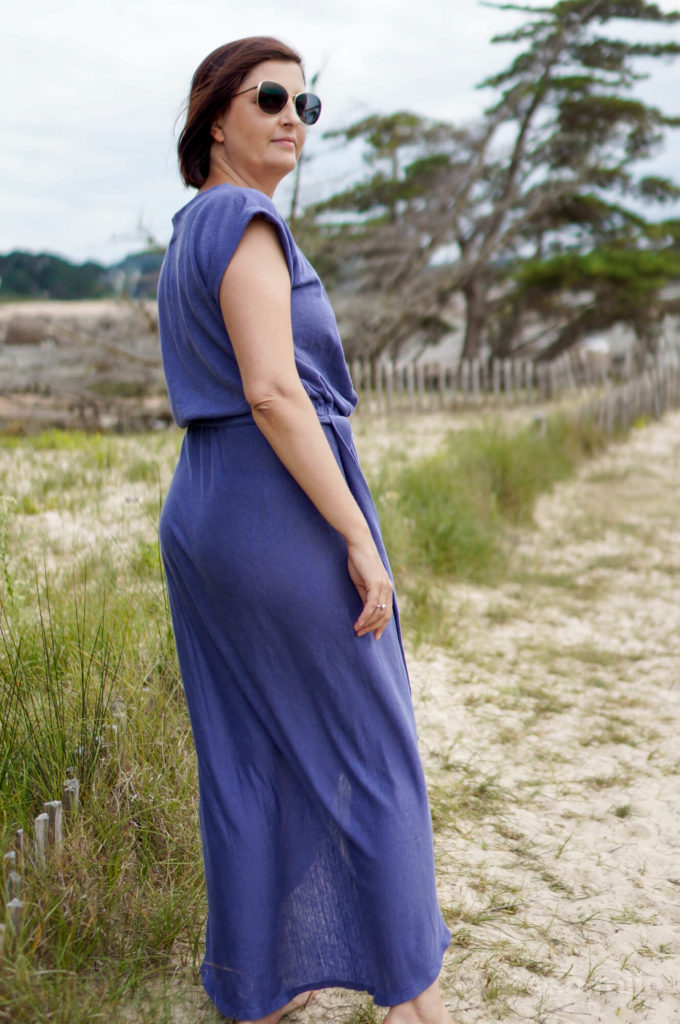 Finally, you must have noticed that this quilted linen jersey is slightly translucent. So you can see that I have legs and guess that I am wearing panties. Breaking news! 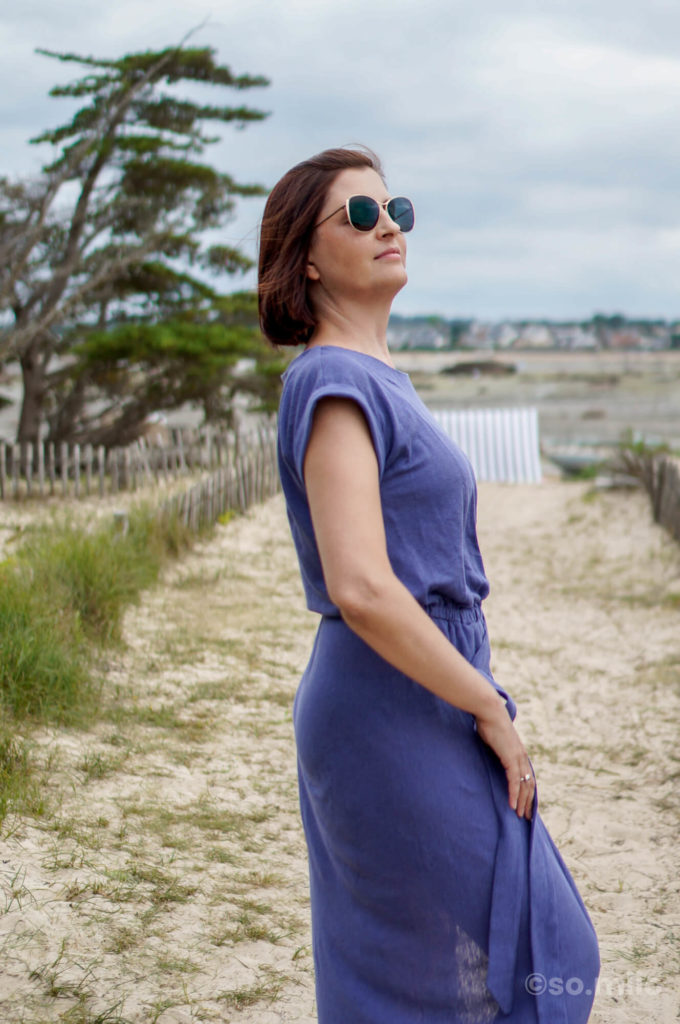 The size range is accurate (in US sizes) but the pattern is not. I sewed the dress in size 8-10 so I didn’t have to worry about grading between sizes.

Once the pattern was drafted, it was obvious to me. The neckline is all mini-rikiki.

This impression was verified by reading the few reviews of the Mallow dress on the internet. 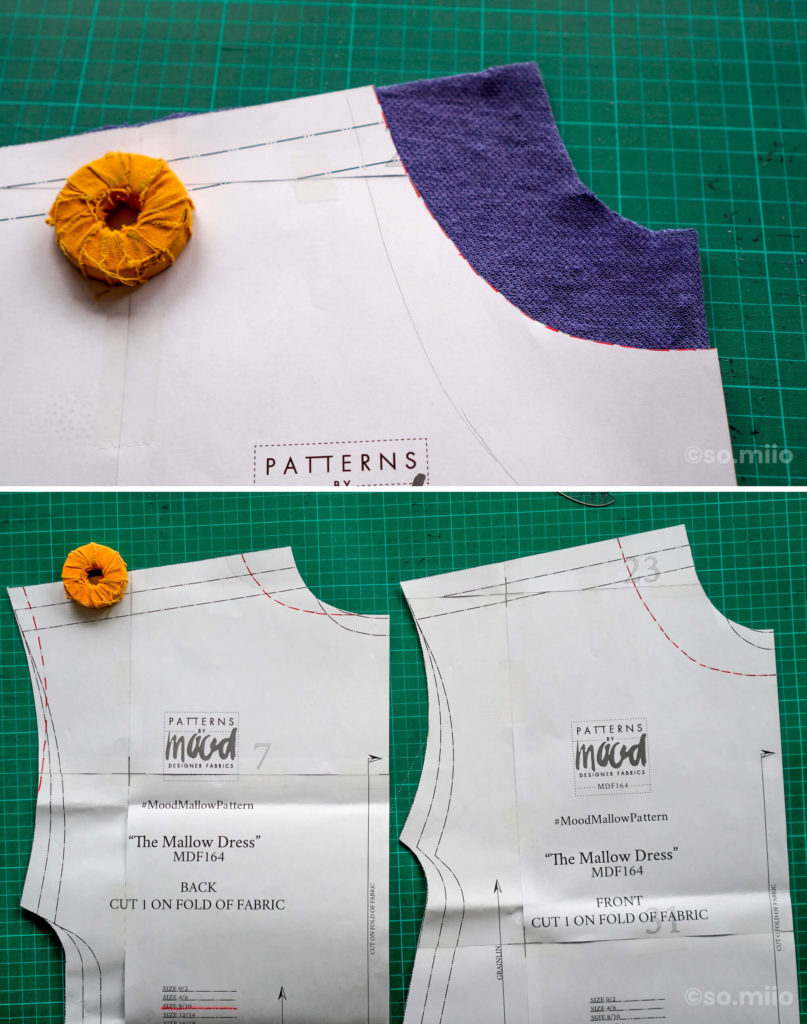 So I used the pattern from the Pixie Tee from Chalk & Notch to draft the neckline. The back armhole was also redesigned because it didn’t seem to fit together. 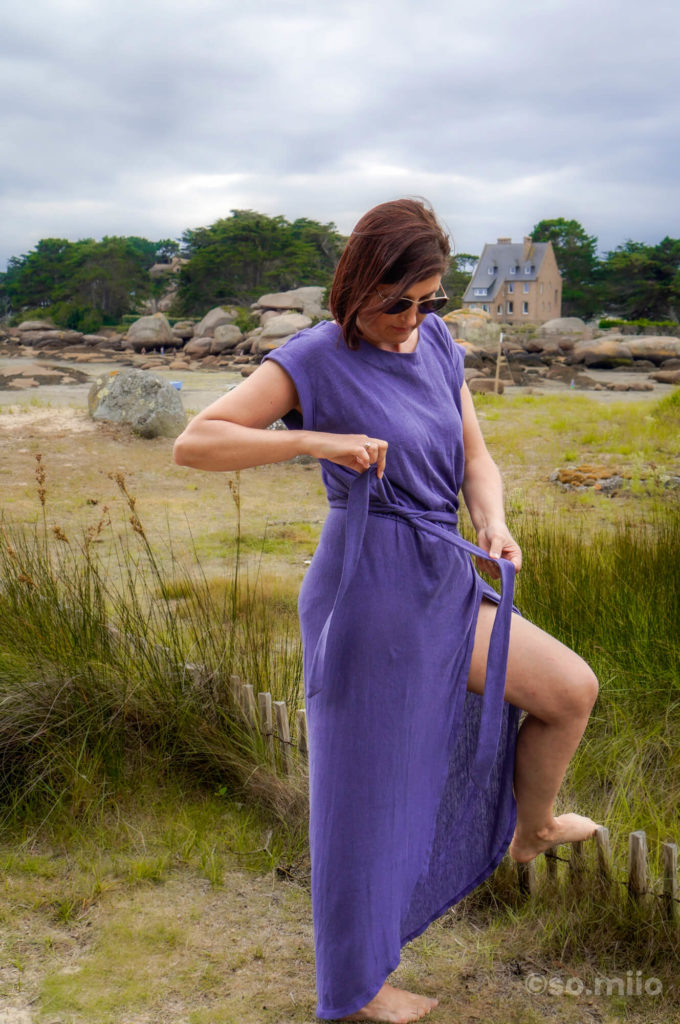 Next, I replaced the neckline’s handkerchief hem finish (on jersey oÔ) with a 2″ facing interfaced with a very light G785 fusible interfacing.

This also prevents the neckline from becoming distorted. 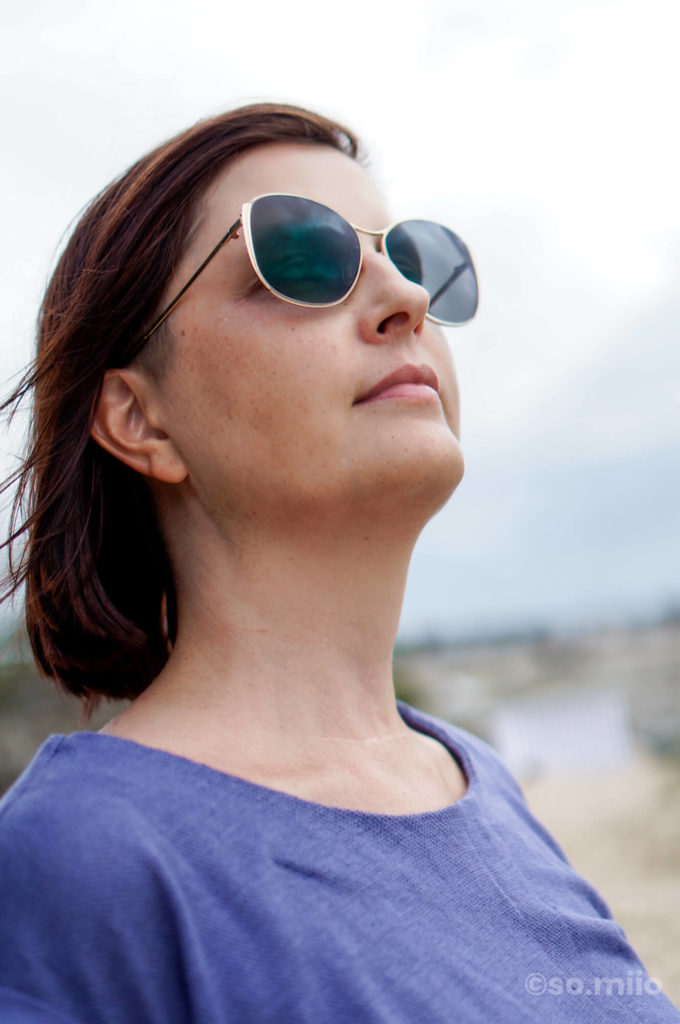 You can see a slight fold on the picture : I fixed the facing with a piece of double-sided fusible interfacing tape… Blah. 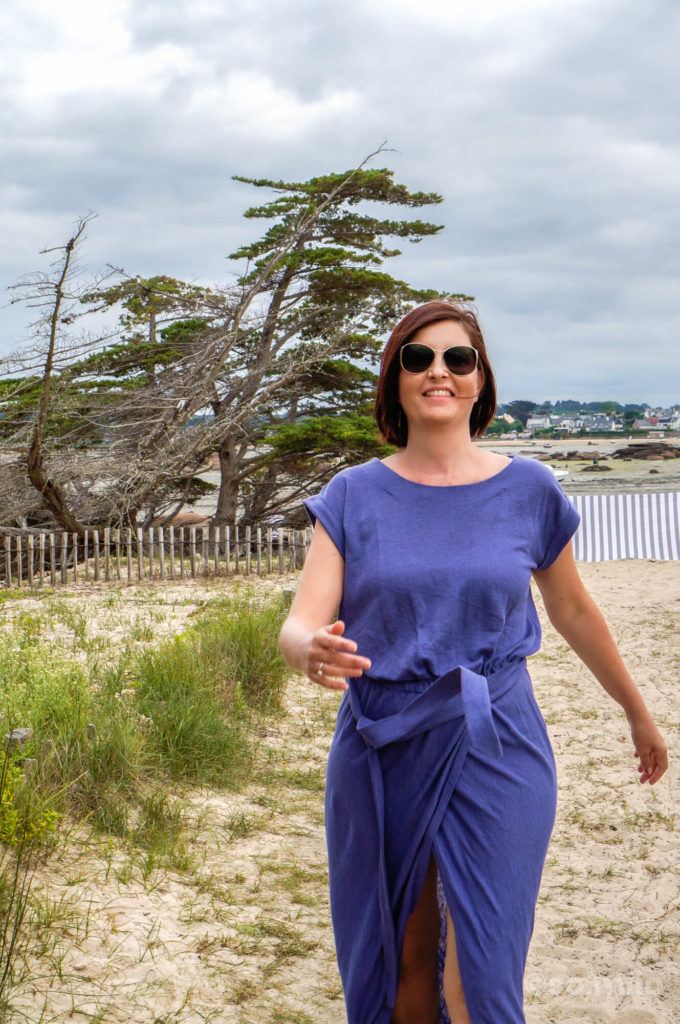 By the way, the shoulder seams are also reinforced with stay tape to combat stretchiness.

Otherwise, the skirt was cut on the fold rather than adding a seam in the middle back as on the pattern (probably necessary for larger sizes). 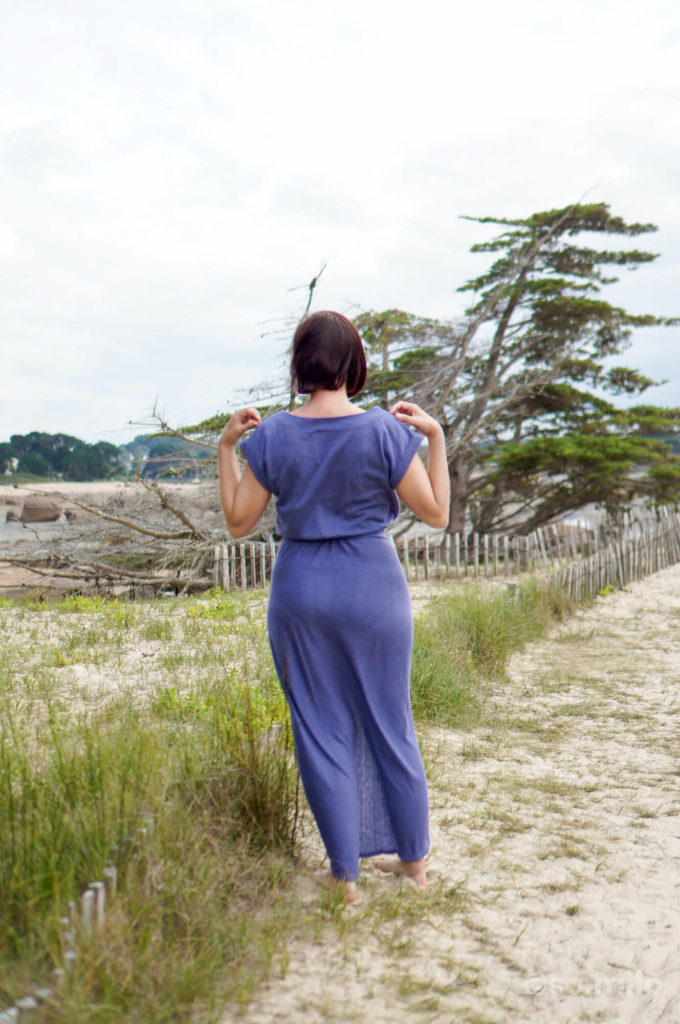 After “draping” the skirt pattern piece around me, I shortened it by 4 inches in the back by redrawing the curves of the fronts. 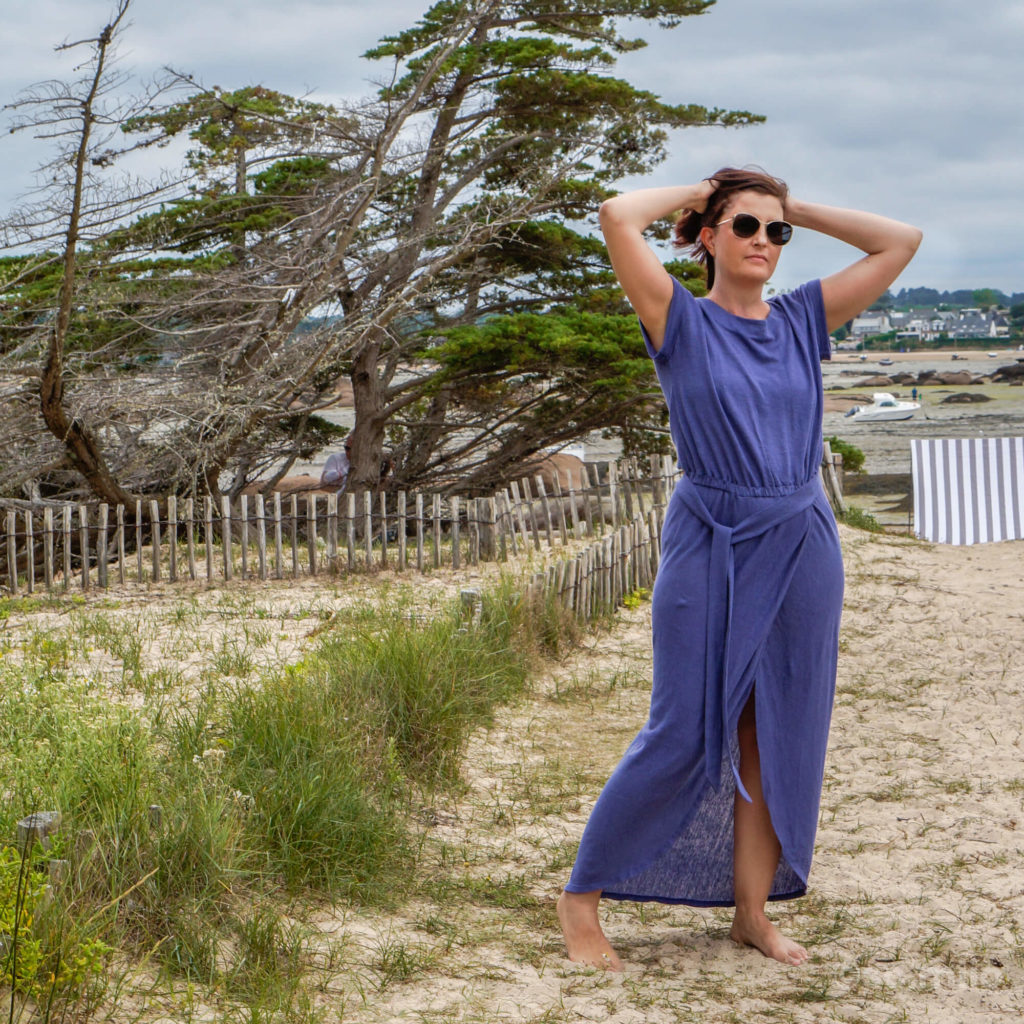 For the belt, I did not follow the explanations at all. They simply suggest to gather the top and the skirt, assemble them and that’s it. No.

So I made a channel to insert an elastic thanks to this very clear tutorial from SewDIY. 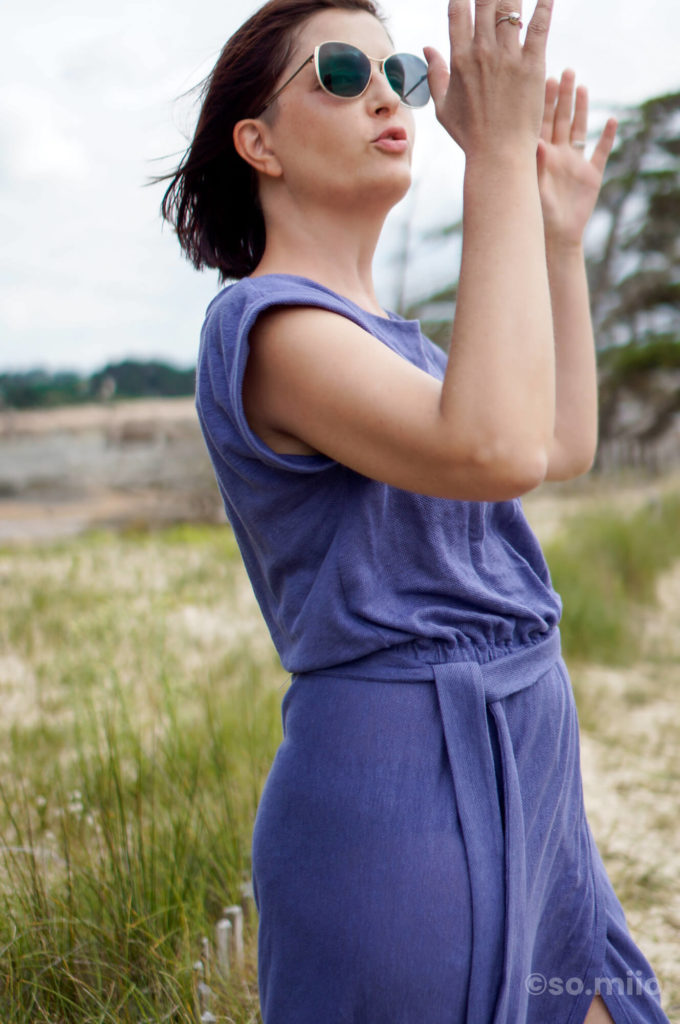 I also sewed the proposed belt to accessorize the waist. The knit is fusibly interfaced to ensure the fabric doesn’t stretch out to the end of the universe. 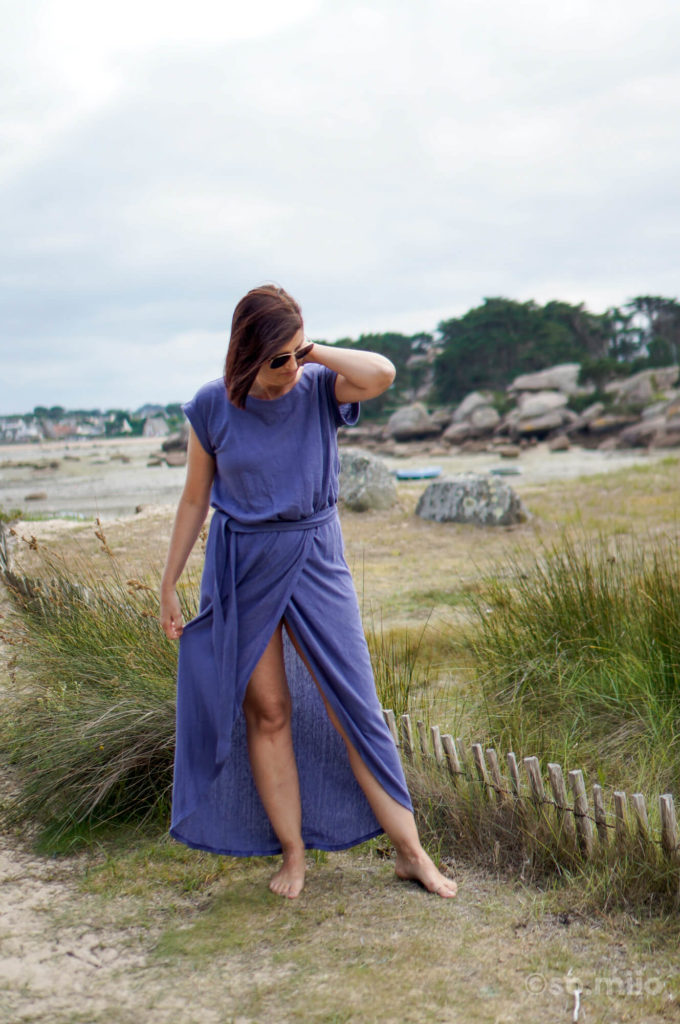 Lastly, I was a little wary about the skirt hem in that non-resilient knit. I was afraid it would all come loose, either at the seam or over time.

So I supported the hem with a viscose ribbon (not sure, it came from a box of a sewing grandma in the bulky) with the serger. Then I made a double lined seam to hide it. Given the shape of the skirt, the inside of the hem is visible and I wanted it to be clean. 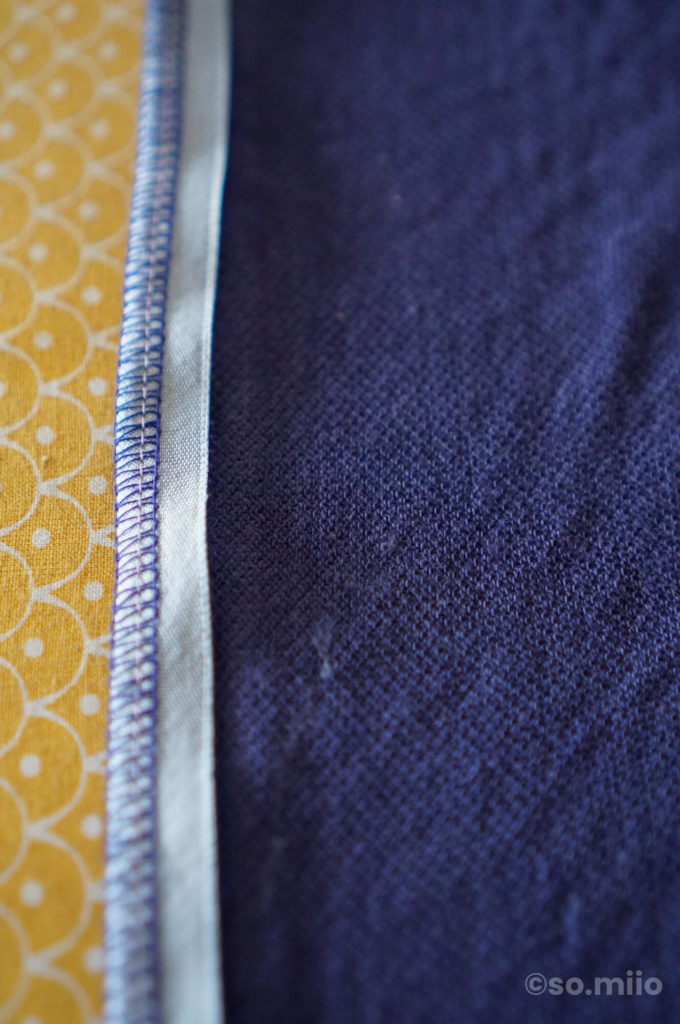 I really like this dress. It’s comfortable and light, but the opening in the front can actually be a little ole’ windy. I may just redo the top as a t-shirt because I found it very wearable in my in-between fittings.

I assume a lot of things at work (like my pink jumpsuit) but maybe not the indentation in this dress.

This is also a first test of the Mood Sewciety patterns that I’ve been wanting to try for a long time.

My review on Mood patterns: these are interesting patterns but to be taken with a pinch of salt and a good dose of critical thinking, both for the drafting and for the DIY explanations. To be reserved for a seamstress who already knows what’s she’s doing. 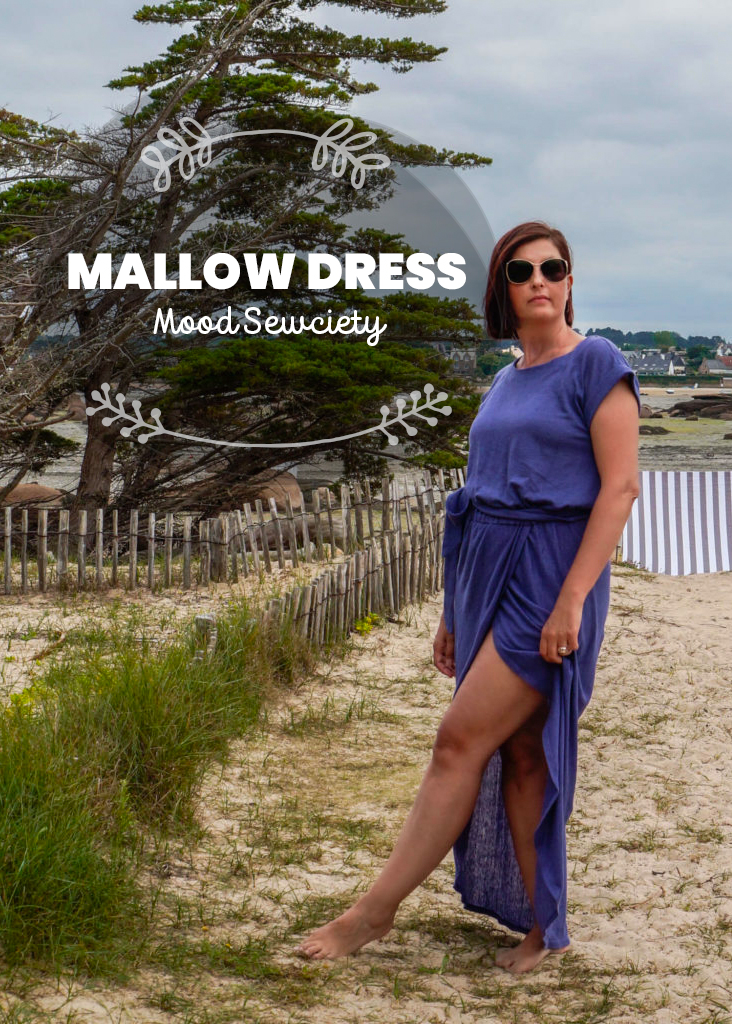 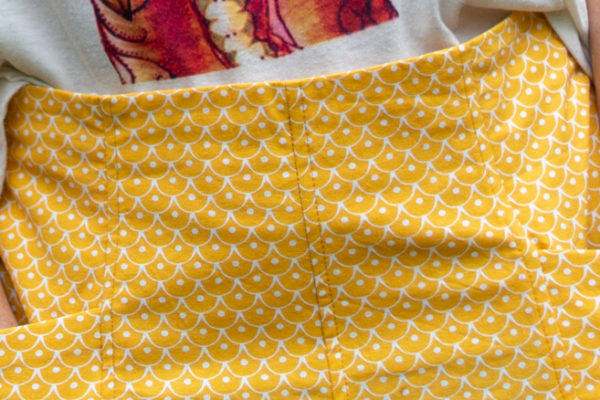 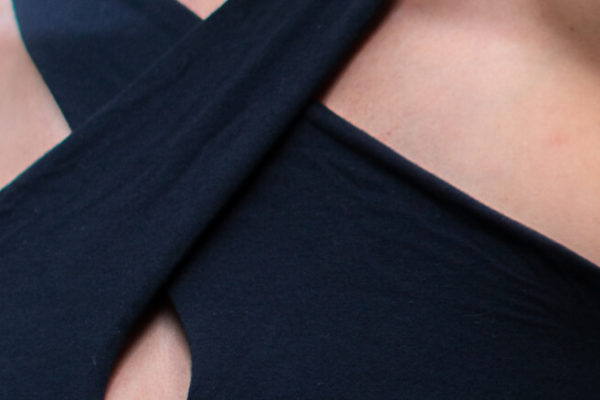 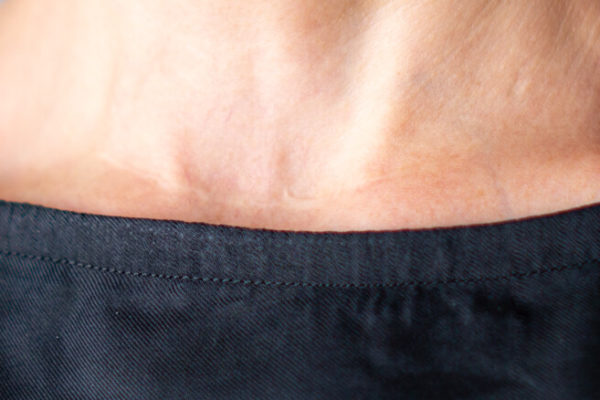 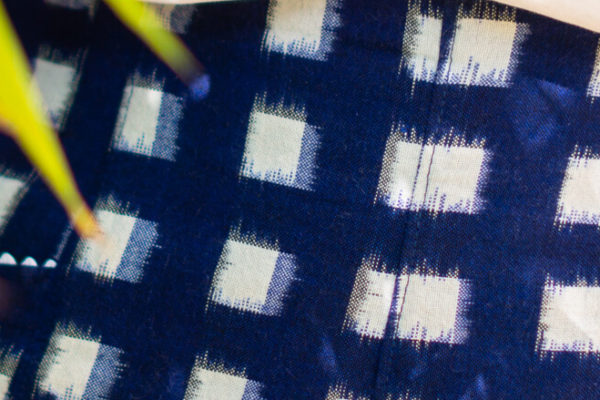