This Lennon skirt was a gift to… my oldest nephew. The oldest one. So, I know it may seem surprising. But my brother-in-law & his sons are not into convention and find skirts very comfortable to wear.

So of course, given the gendered clothing industry, it can be complicated for them to find skirt designs that work for them. Hence the idea of sewing a custom-made one for my nephew the artist.

I took a brief from his parents about his colors (orange, pink, bright green, etc.) and did a micro-survey to choose the pattern.

Once the pattern was chosen, I turned to God rather than his saints (i.e., simply, my nephew) to suggest a selection of fabrics. 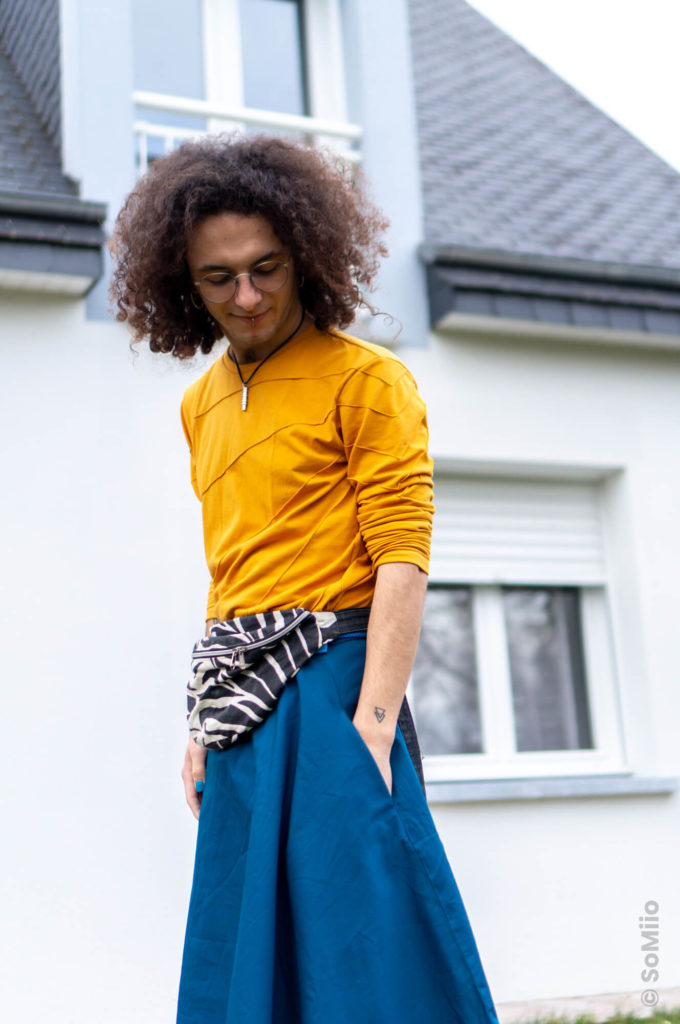 As I didn’t think I would need the whole coupon, and in order not to waste it, I proposed only coupons whose remnants would be usable for me: so no apple green or orange.

Details of the pattern The Lennon skirt is a pattern from German designer Okistyle who offers patterns that are out of the ordinary, in a strong, urban and very contemporary style.

I wouldn’t wear all her patterns, but I love her proposals. 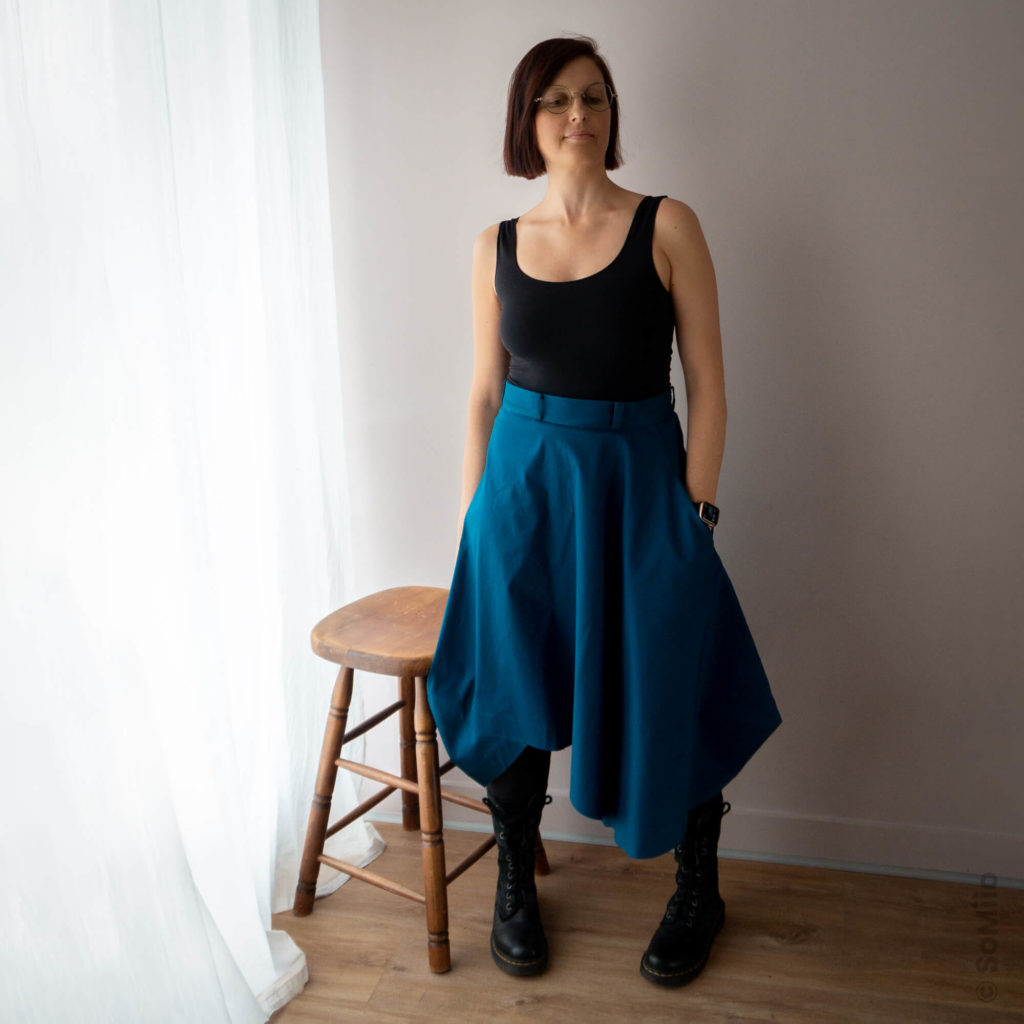 I wear the skirt over my leggings in fleece which thickens my waist of 4 good centimeters.

The patterns are only available in PDF on Etsy, as the designer closed her site 1.5 years ago. 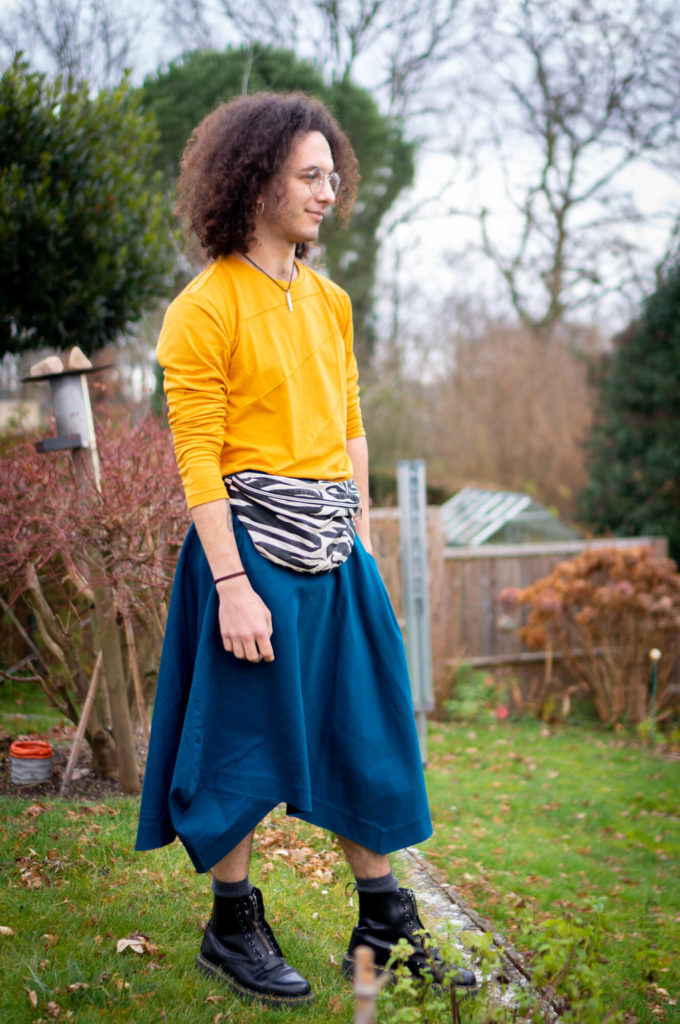 And for my future skirt (but yes, the one I told you about in my 2022 project list), I followed the suggestion only on the product sheet on Etsy: I contacted the designer by email to get the files for the lower height, sizes 17 to 20 and 20 to 23. 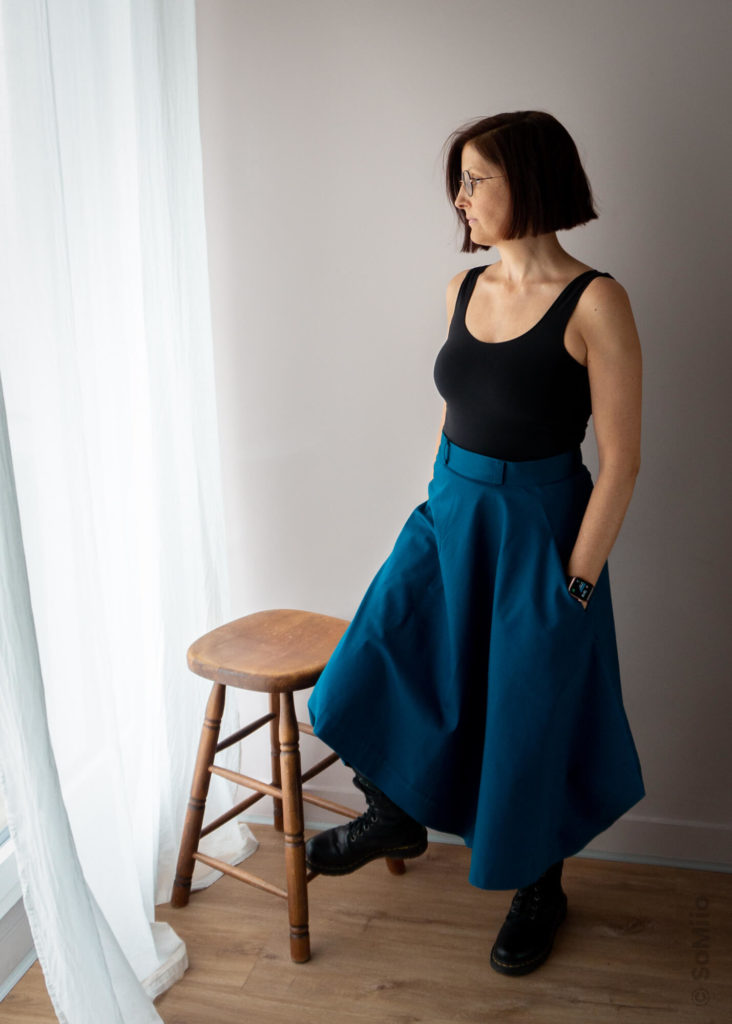 The Lennon skirt is an asymmetrical skirt closed by an invisible zip on one side and with a single pocket on the other.

On the pattern board, we have only 3 pieces: 1 front – back identical, the belt and the pocket. And, too bad, the pocket and waistband pieces are superimposed on the front-back on the A4 which forces to transfer them in addition. Gnnn.

On the other hand, it’s also what makes it possible to know where the pocket is supposed to be sewn since there is no other mark. 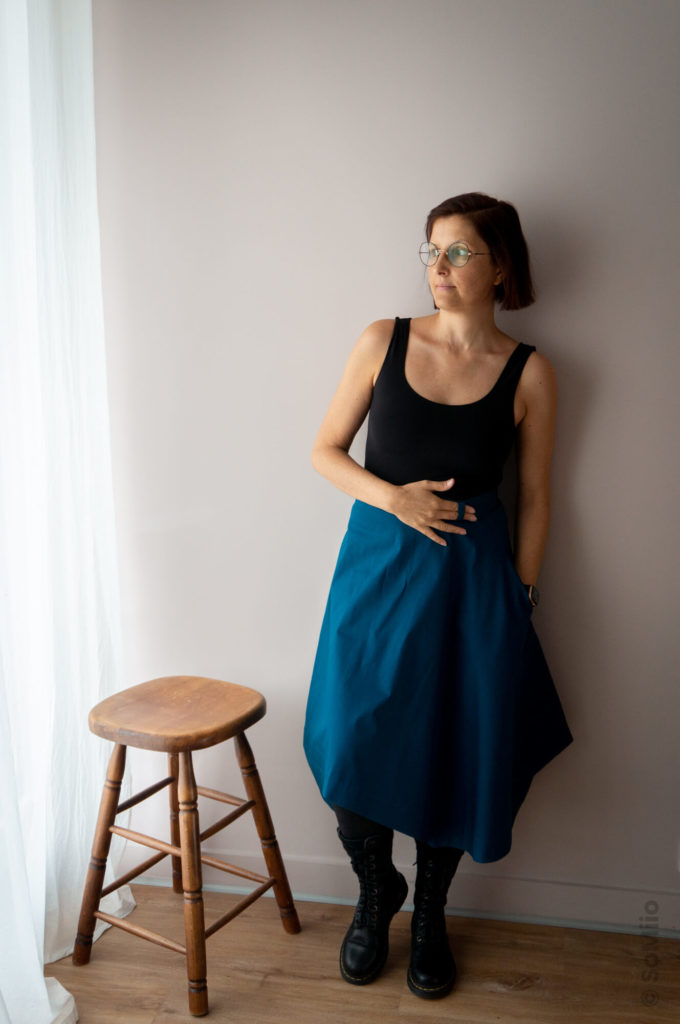 The instructions are presented in English and German in the same document, with no difference in style between the two languages. Added to a very minimal layout, this makes the instructions not very easy to read.

They are also rather brief and the photos, which are too zoomed in, do not provide much information on the points of difficulty.

We will say that this is part of the charm of the pattern: sewing pattern AND puzzle at the same time.

We start with 2-3 technical information : 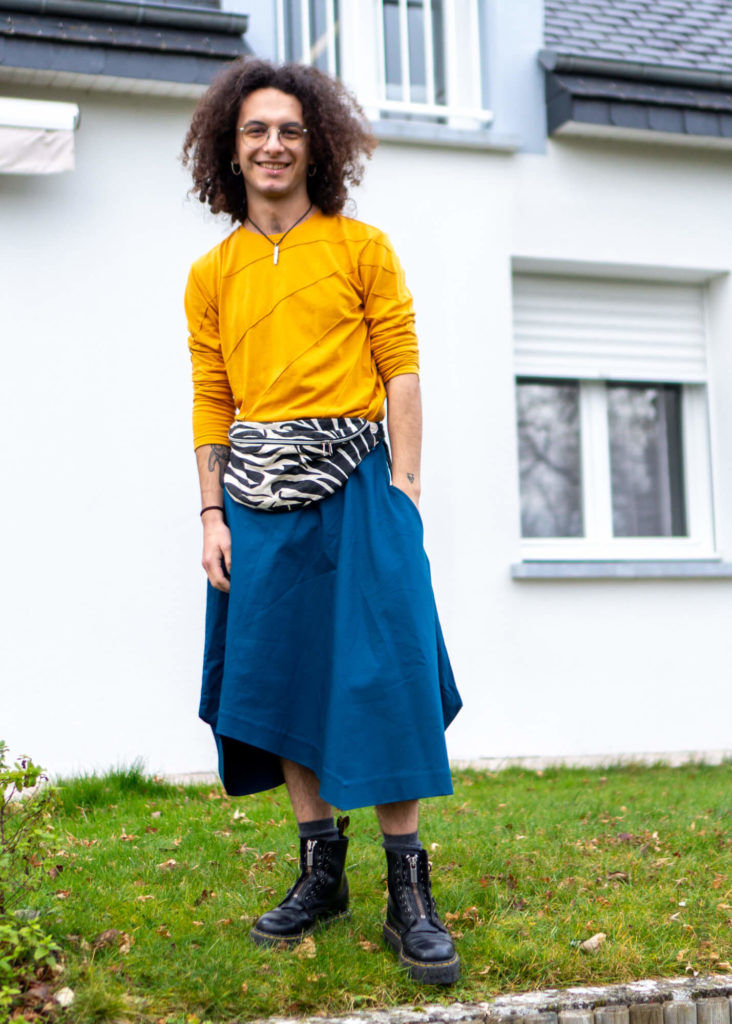 We return to the puzzle, we add the origami and we get the assembly of the skirt.

The back and the front are cut exactly the same, both in the same way: ie NOT cut mirrored unlike most patterns. 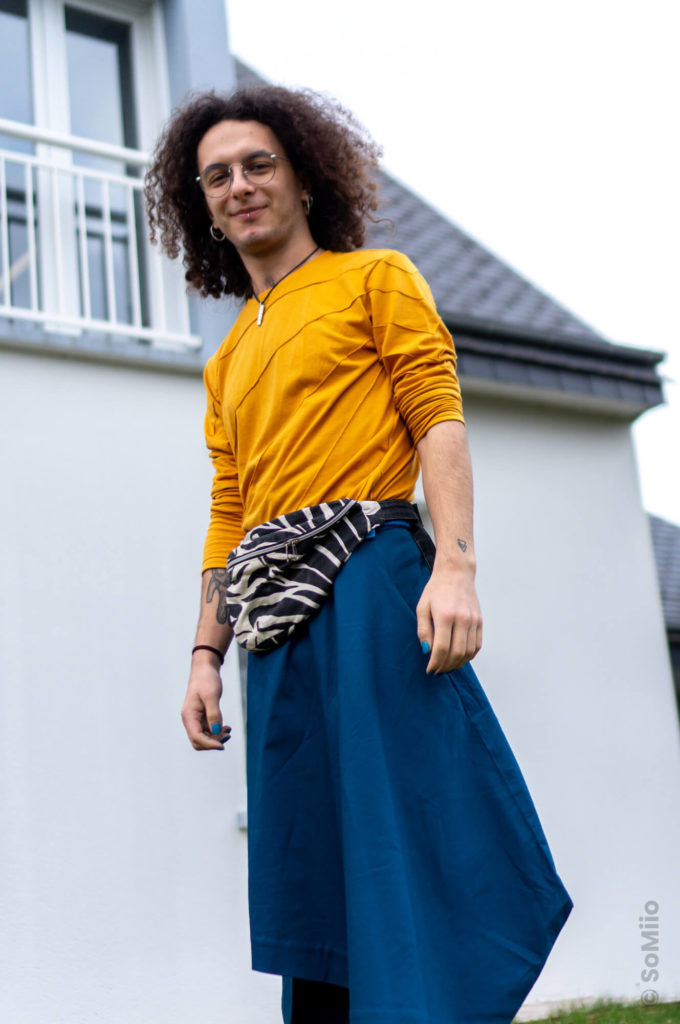 Then, we stitch normally right sides together except that the sides are of different lengths and an orphaned piece will be treated with the hem. 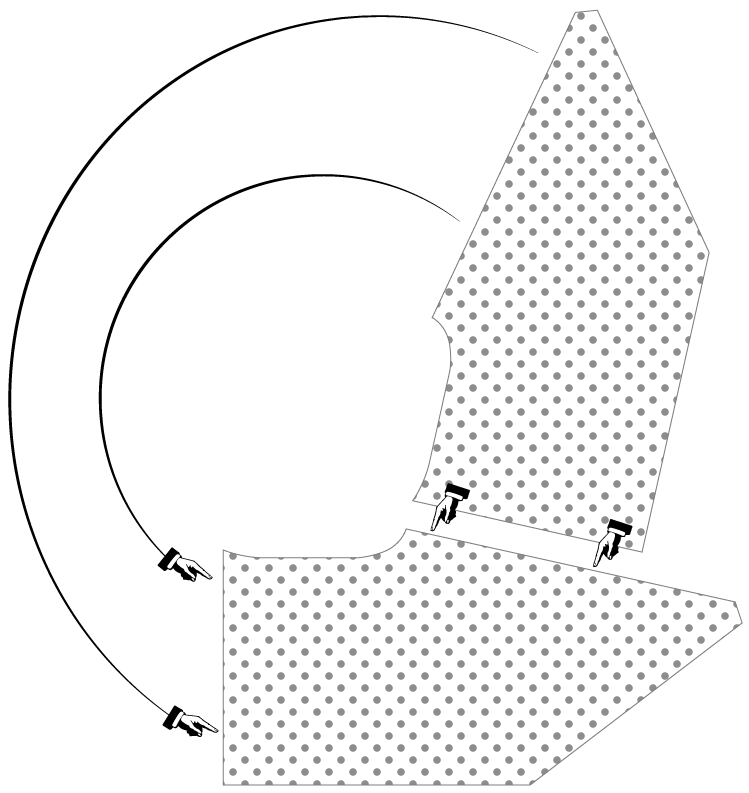 Once you have the front and back assembly figured out, it’s basically a matter of finishing the hem properly. That being said, the hem still requires a bit of work because of its asymmetry which lets the inside of the skirt show when worn.

And it takes even more work when you hand sew the whole hem with an invisible cast-on stitch. But who would do that, right? 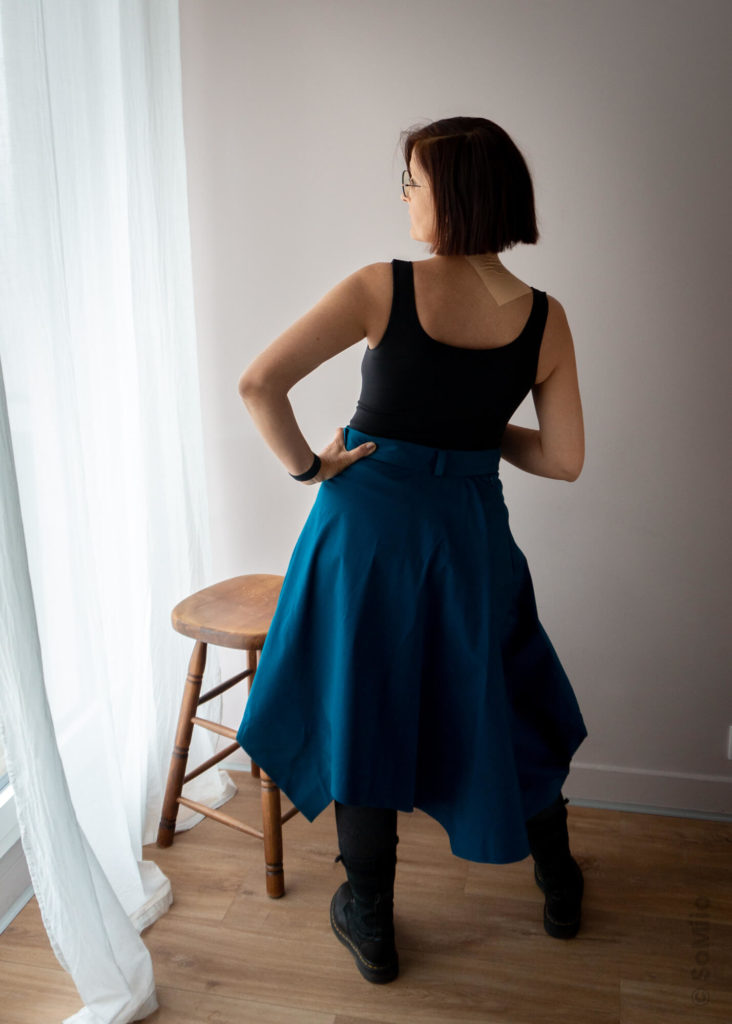 The intended finish of the belt is an edge to edge with a hook. A finish that I found… mmmh, let’s say… that I didn’t like at all. So I added a piece of 5 cm to create an overlay and place snaps.

Also, taken by insistent suspicions about the generous dimensions of the waist, I added belt loops… and indeed, my nephew confirmed that he will wear it with a belt. 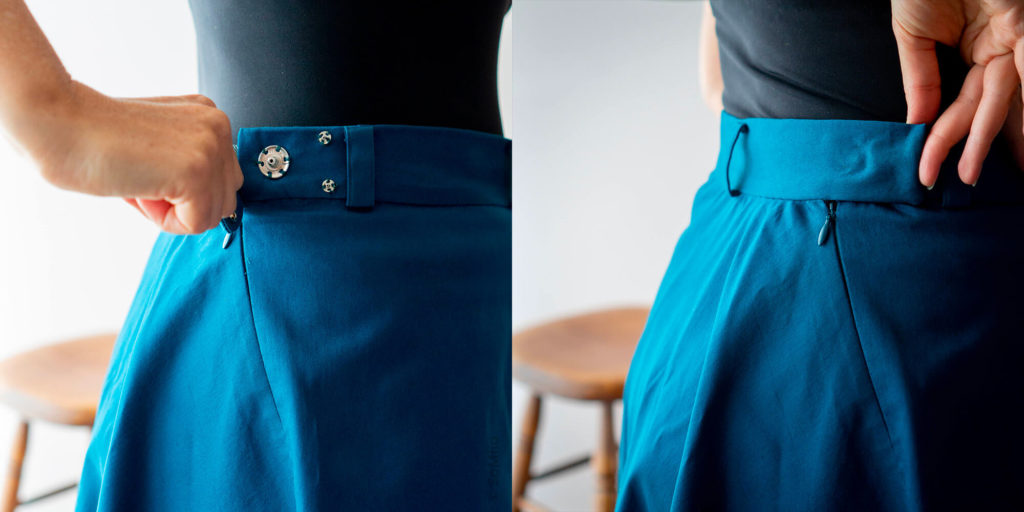 And, abracadabri abracadabra, one of the belt loops comes to hide the little last minute addition on the belt.

This banana, the Bauch.laden from Leni Pepunkt, was sewn for Christmas last year and I’m happy to say he wears it every day. The proof! 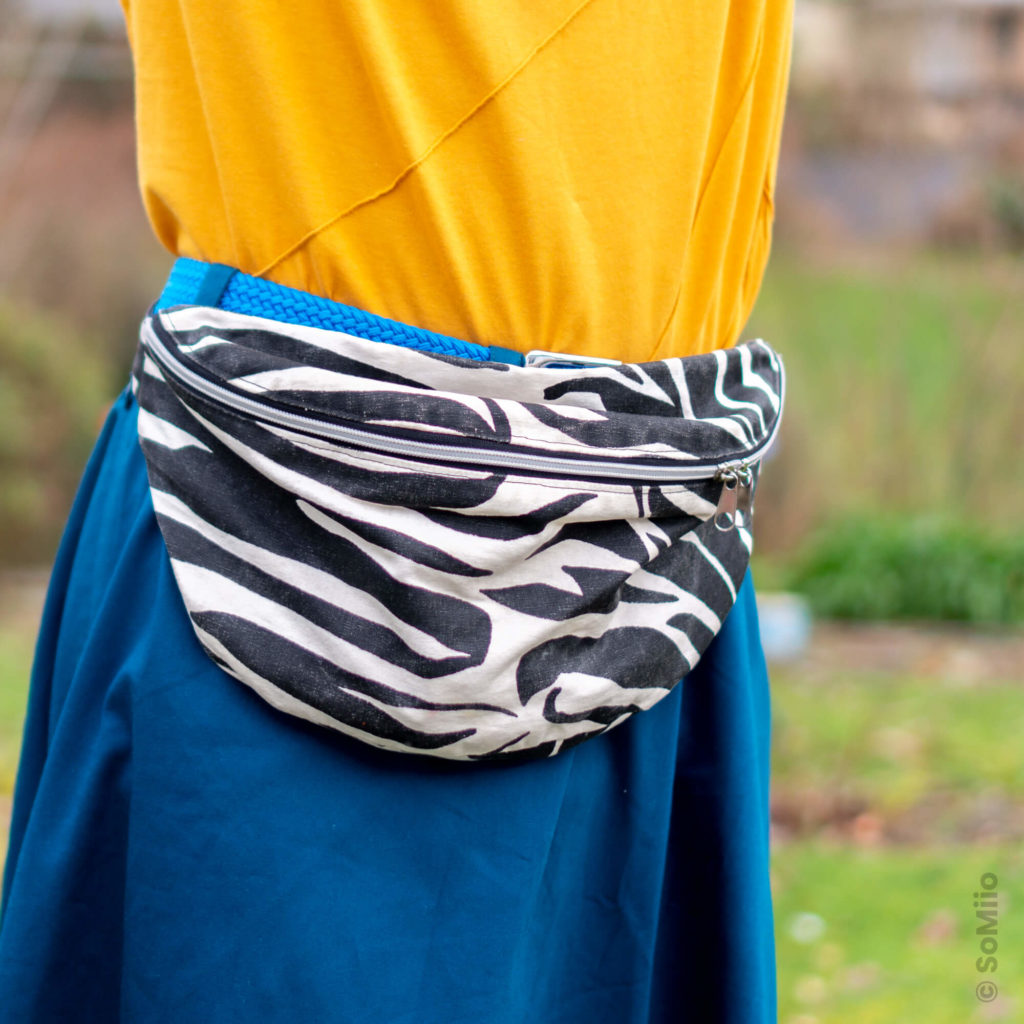 The pattern is fun but clearly not for beginners. I’m a little disappointed by the lack of markings on the pieces or the minimalist explanations. Clearly, the assembly range has not been thought for months to make it easier for us.

I blame the fabric for being a little too wrinkly, which is quickly done with this skirt.

That being said, I hope he likes the skirt as much as he did the fanny pack last year… although I don’t expect him to wear it as much!

And we continue next week with my Christmas gifts. At this rate, we will be at Easter! 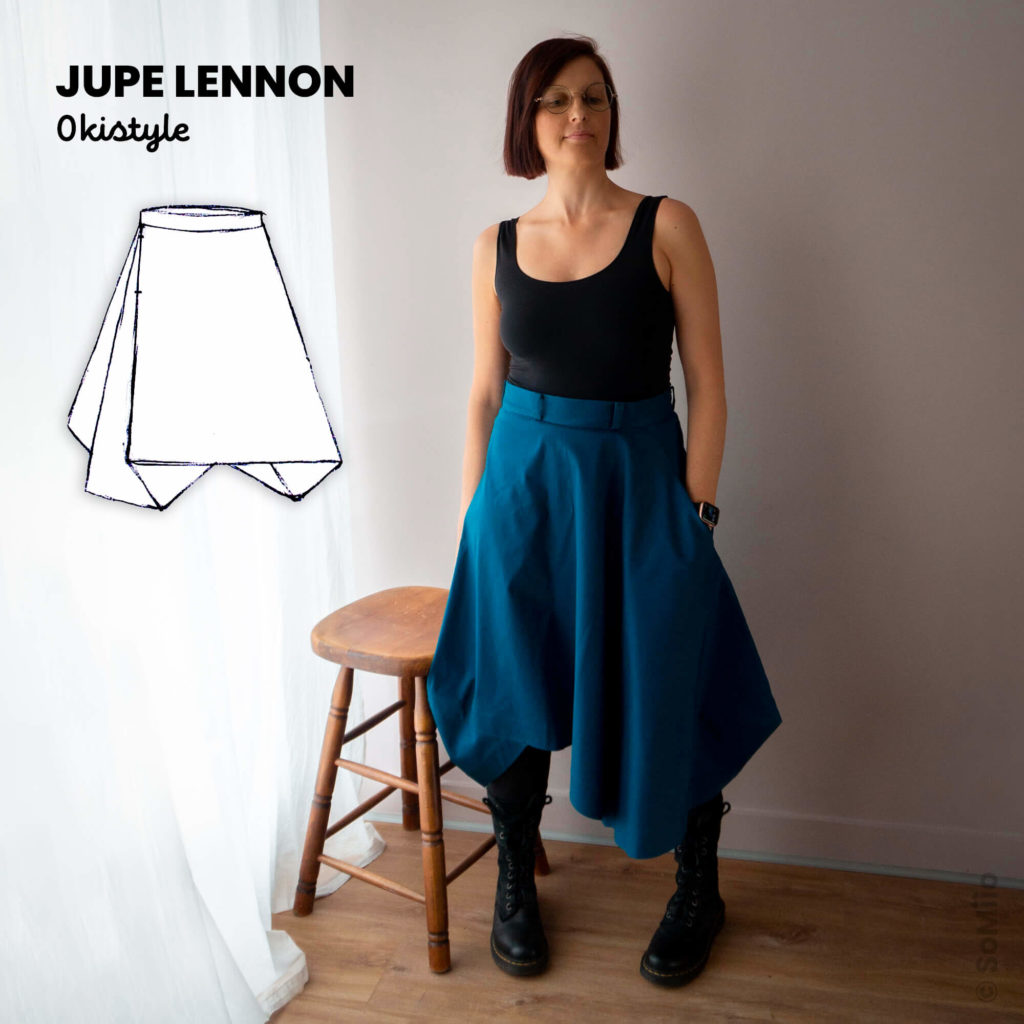 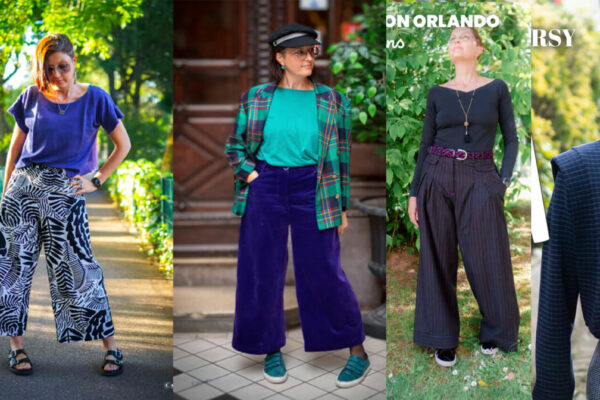 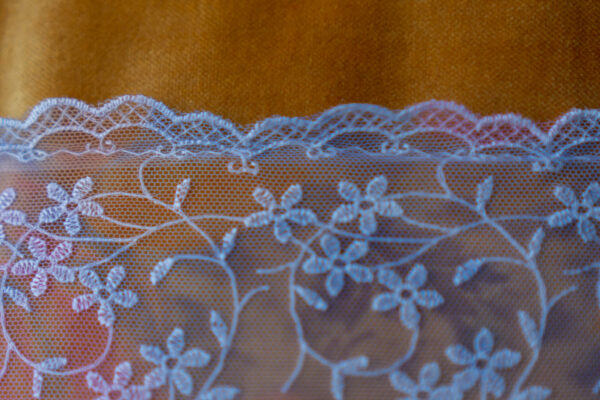 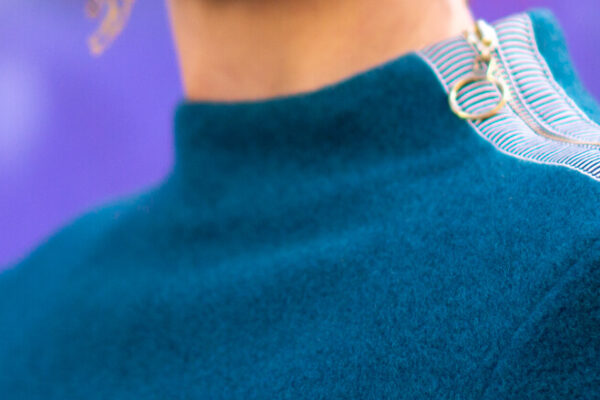 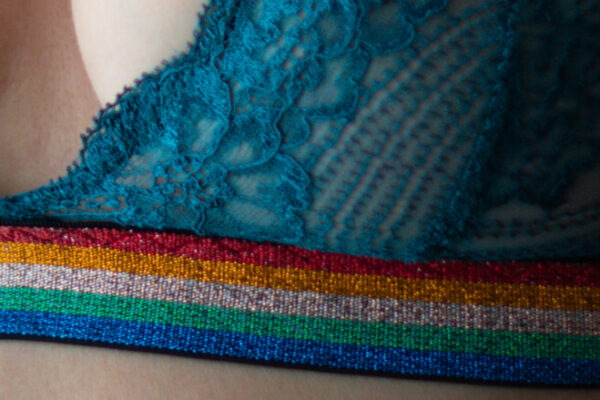